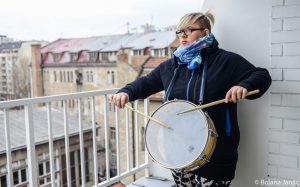 Zoe was always rebellious and did not accept to submit to any authority. She has always been tormented by injustice, especially that class injustice. She was once an activist for children rights, whereas today she is the voice of women.

Zoe Gudović is from Belgrade and has 20 years of working as an activist feminist/lesbian, seeking out against any violence, oppression and discrimination.

Although girls through traditional roles were always given the message to be quiet and behave, Zoe was always the opposite: loud and disobedient, which to this day she still likes to be so!

The beginnings of her work on the feminist movement she began 20 years ago when she was “aware of the economic inequality women lived in, within the “Zene na delu” group, about how much women are present politically, rather than culturally and social issues are marginalized. All these things were her driving force to continually support changes in social models for a better life of women. Her lesbian life also gave her a wider picture of how women are understood and accepted, how the media and the system dictate the appearance, behavior and acceptance of women, especially when they still need to be reproductive machines.

Zoe comes from the field of the feminist theater, which organized that the feminist circles 20 years ago, and which speaks theoretically about body and security, while the practice is inadequate. That is why she devoted her 20 years of affirmation of feminist art, the link between artists and activists, and the visibility of feminist warfare in wider artistic circles.

However, her rebellion was not too easy to be accepted by her family. She recalls the ignorance and accuses of her and her sister of betrayal because they had contacts with women from all over the former Yugoslavia. “My family had difficulty accepting the fact that my older sister Milica and I did not stick to nationalistic and militaristic discourse and often ignored us because they thought we were traitors because we are in constant contact with women from all over the former, Yugoslavia. However, over the time, these reactions have also changed,” says Zoe

Although the situation for women today has changed in Serbia and beyond, Zoe cannot be happy because the reality, as she says, is still fragile and there is no equality as long as women are in fear and there is great violence “Unfortunately, reality sends messages every day for women to be in the patriarchal system that controls us, in which the dominance and strength of men is clear. The reality is mostly reflected in statistics on violence against women, women’s murders, repeat hunting for abortion, a church that is mixed with women’s basic rights even though Serbia is a secular state. Women are the first to be hit when there are discretionary measures, and the first are those who leave work, they are dismissed, they suffer from sexual abuse, sexual harassment and violence.

Something that hurts Zoe is also violence against women. She thinks it is terrible that women have taken on the role of addressing issues such as violence against women, because according to her, men do violence, wars, murder, and rape. There is no reason for women to emancipate men, they should assume roles themselves, realize that the privilege of power needs to be deconstructed and self-organized to be aware of others who are constantly causing evil.

Zoe is also the winner of the “Jelena Šantić” prize in the category of individuals for their continued action that promotes peaceful activism, tolerance and nonviolence. She initiated the march of lesbians in March 2015, which gathered the different women and for the first time marched alone through the streets of Belgrade without incident, and she initiated the women’s club for March 8! Likewise, Zoe is co-founder of the Feminist Theater, and since 1999 works actively to make visible the feminist performative art. For 16 years she has held theater workshops in over 20 cities in Serbia, Ljubljana, Sarajevo, Skopje, Barcelona, Berlin, Budapest, Vienna etc; and has created the link between female artists &amp; activists under the title “Women’s Movement/ Women’s Theater – Women’s Corps”.

Zoe is now preparing for the great festival to be held in February 2018 at the Magdalen Munich Festival, where will be the opening of the festival with her performance installation, Disocijacija

At the same time, she works at the Feminist Foundation Rekonstrukcija Ženski as a person responsible for public relations and the development of local philanthropy, which seeks to raise people’s awareness of the importance of money, responsibility for money and its distribution for the sake of a more equal report in society. Some of the activities are implemented by Feminist Foundation Rekonstrukcija Ženski!

This organization tries to support a person, family, or a certain situation where a person or a collective is found, raise money, but it also associates with some coffee shops and artists who support our actions. Joy of excitement is that the Foundation creates public spaces for exchange, association, solidarity actions, networking, but also for joy and excitement. At the moment when they have little room to enjoy in the state – they decide to abandon!

In the framework of feminist philanthropy, which is conducted by Rekonstrukcija Ženski fond, many women with different professions confess and express their thoughts on this topic. The Foundation strives to promote women and their life-giving and creative efforts and their thoughts when it comes to donations, solidarity, and visibility