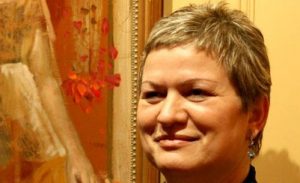 Her story is very interesting along with her memories and birthday gifts in adolescence. Shukrije Gashi, born in February 1960 in Prishtina, a former political prisoner, lawyer and poet, has for the past 20 years contributed to building peace by leading the Kosovo Conflict Management Center – Partners Kosova, and has participated closely in 400 mediation cases.

“Shuki, be careful not to talk with friends about our evening talks about the violated rights of Albanians, because UDBA can arrive and arrest men and boys, maybe even you! … – her mother advised. She further continued saying that she did not know whether the day would ever come for Albanian women to speak in the Albanian Assembly for equal work with men! – she remembers the words her mother told her.

Her mother, who had remained without a father at the age of three because he was killed by the Serbian gendarmerie, and life was very difficult for her family after this murder, respectively for women. She talks about her mother and how she was not even asked about her will to get married. (Hafije – Shuki’s mother) was not even asked by her uncles when Ahmet (her husband) asked for a bride when she was 14-15 years old because she liked her when she saw her in the village.

She talks about the murder of her grandfather and how her mother felt after his death. She remembers her words telling her that she and other women remained like a stump in the middle of the room, as if cursed by life. Especially for them as girls they remained as multiple orphans; it was a tough time, I wish it never turns back,” Shuki was told by her mother when her father was killed. When she grew up, she accepted a special, meaningful, but interesting gift for that time. Ahmeti (her father) handed her a copy of the key to the main entrance of the house. “Shuki, now you have grown up and you no longer need your mother’s expectations – to open the door for you at night when you return home. Get in and out whenever you want to. Whereas her friends considered her father to be a polite man, liberal, and soulful.

Her grandmother, mother and father inspired Shuki to fight for more rights for women. Her grandmother enjoyed the great trust of men, not just those of the home, but also the middle-aged nursing mummies to find solutions to the problems of the community for various confusion. Her word had great weight in the chambers of well-known men, as traditional mediators and subscribers. Often, as Shuki remembers, it has happened to meet men with big mustache, seeking advice from her.

Today Shuki works as Executive Director at the Conflict Management Center. The specificity of this program has been and remains, changing the culture of thinking to women and men, from conventional thinking to thinking and acting critically to gender issues and equality between men and women. She struggles very much through, as Shuki says “gender lentils” for the realization of gender equality.

This center has implemented many initiatives such as Mediation Program &amp; drafting of the first Kosovo Mediation Project. This initiative has provided training for young mediators, enabling access to contextual diversification and disagreement; the program for combating the violent religious radicalization leading to terrorism, a project which through critical media has addressed the topics of radicalization with high school students.

Shuki, an activist who for decades has promoted mediation and human rights, hopes that equality and empowerment of women in Kosovo will be done when we have equality in decision-making levels when we have women in leadership positions, as prime minister, mayor, minister, in particular, the Minister of Defense, Ministry of Foreign Affairs etc. “Whenever women and men react to the protection of gender rights and human rights, it is a celebration for me. The most desperate is the status of women victims of sexual violence during the recent war in Kosovo (1998-1999), as well as the lack of will of international justice to prosecute and convicts Milosevic regime, including a part of that regime, which is still active in Belgrade, for genocide in Kosovo and Bosnia,” she says.