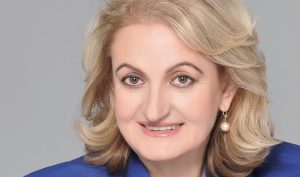 Shqipe Malushi is one of those women from whom you have what to learn. A vigorous woman, with an unusual story, she is the catalyst of change in many countries. Although paralyzed but standing up, she has performed 18 surgeries, , and despite the fact that she is faced with cancer, she is trying to make changes in the world around her wherever her foot breaks.

Shqipe was born in Peja by a family known for its contribution to the Albanian nation, her great-grandfather, Haxhi Zeka, was a prominent leader of the anti-Ottoman National Movement and came from a well-known family in Peja and Kosovo.

At the age of 3, her father died – who was the first pharmacist in Kosovo and left her mother a widow at the age of 24. The pain experienced by the Shqipe’s family, especially her grandmother, was very serious for her. As very young, Shqipe, always tried to make others laugh and, for a few moments, enjoy the benefits of this universe, bringing happiness to where there was pain. After her father’s death, she tried to break the traditional cycle and patriarchal discipline in her home.

Her dream was to play in the cirque or in the world of television because life in Peja was very boring, and the circus was the only fun for her.  So, one day at the age of 14 she left her home to see the world after reading in a news magazine that Tom Jones is helping the orphan and talented children. I stole my mother’s passport and about 5,000 marks from my grandfather. After a strange adventure she had in the cultural and tourist center, in Turkey, Istanbul, she returned to Kosovo via Interpol. Before returning, having first refused to return to her home, she was arrested and jailed in Turkey’s transitional prison.

At that time, after returning to beautiful Peja, the sentence she received from the family and the circle for that act was silence, no one said a word to her for six months. After six months, they stopped her school for a year and “imprisoned” her in a gloomy room. But her painful history does not end there. While staying in the room as a prisoner, she tried to kill herself, but happily she survived. Despite numerous challenges and a dozen of good and bad adventures, two years after leaving from the house, the ballet school for girls was opened, because this made parents to reflect.

After graduating from high school, she went to Belgrade to study the pharmacy, which she left after years, began her studies in psychology, she disliked it and leave it in half, started the French language and eventually enrolled and graduated from the Faculty of Albanology and the Albanian language. On June 20, 1980, a program was opened for a 3-month exchange of students in USA, where Shqipe was admitted. Along the way to the US, she decides to become a writer. Shqipe has always found the way to continue her quest and adventure on her way, beyond the Rugova Mountains, and so she did not return to Kosovo anymore.

She has dedicated all her life to empowering women and building peace. She has lectured on democracy, human rights, crisis management in the US, Albania, Kosovo, Afghanistan, Chile, Lebanon, Kabul and India. She has worked in these countries as a gender counselor and developing human potential. In New York she has completed bachelor studies at “Sarah Lasrence College” and has continued her Master’s degree at New York University. During her career she won the prizes: the NATO medal for Kosovo’s support in the Peace Preservation Mission, the Peace angel from Women’s Day Magazine, The Women of the year selected by Refugee Women’s Network.

During the war in Kosovo, she returned to help traumatized refugees in the camps of Albania. It does so in many countries around the world. She has always found various forms to help others to experience the good and the love.

Today, Shqipe is a writer, trainer for leadership and gender issues and human rights activist. She is an advocate for peace that promotes love among people and caring for humanity, which has changed the lives of many people of this world. For example, we are just mentioning some of the many benefits that she has done: She has born again for the second time Sylë Kodra from Prizren, she made him walk again by providing two prostheses in India because in Kosovo it was impossible, she provided financial means for Valmira Berisha, a blind girl to continue her doctoral studies; helped a girl from India who experienced violence from brothers to obtain a scholarship from Prague University for film studies etc.