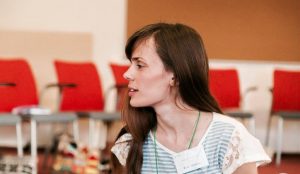 Rrezarta Abdullahu lives in Ferizaj, the city she was born in.

She describes herself as a warrior and bold, always taking into account the circumstances she operates in.

When she mentions childhood and youth, Rrezarta considers herself as child of war, as already named by many. For her generation, life is divided into two parts: before and after the war. And when it comes to childhood, she speaks of a traumatic experience and survival of individuals, who at any price and in every field seek to function as free beings! Maybe more than just free because there is no place in the world, where one can pay the price of freedom. So, almost all childhood memories are faded, before the survival experience, which today also affects her social advocacy.

As the only daughter in the family with a lot of men, she learned that things might look different if family members had mutual understanding among themselves and especially if family members are stimulated that when encountering the outside world, they might be oppressed or discriminated against. Throughout her lifetime, she was exposed to some kind of positive discrimination in her close family, where her parents created all sorts of advantages for her as opposed to her three brothers, with the aim and hope that this commitment would proceed one day her way out in the in society. Certainly, this was not enough for her to find the place of belonging.  Although she was motivated beyond all to treat herself as a human being, not less than her brothers; the outside world and confrontation with the same is cruel and wild. However, encountering the outside world was difficult and wild, the challenges were endless and the opportunities were small, and in order to seize them she had find hard.

She thinks that everything we create and do, returns to the basic need for survival, where for survival you need to fight not only for yourself, but also for your relatives, friends and sisters wherever they are, especially when they do not have your voice and motivation.

Nowadays, as an activist, it is not easy for her to deal with the issues she raises together with the like-minded people, as there are certainly a lot of prejudices, coming from all sides, even from friends and family members, we are labeled as if we are transmitting our problems to the world, Rreze observes. Yet, she states that it does not make any sense if we fail to bring these issues for discussion on the table whenever we are gathered with the people we know.  She thinks she has been successful in this because essentially it is no longer a taboo to talk about the right to property, on the rejection of marriage or about sexual abuse at work or at school. This makes her in return a passionate and 100% determined activist.

Most of the activities and projects she was engaged in, without any doubt, have contributed to her development, as women and activists, including the activities of the Artpolis Center itself, which is why she is grateful and considers this one of her first love to cultivate her passion as a young woman, who despite everything else is eager to give her contribution. . Yet, the place that made her room to express and convey her concerns, to sympathize with other women and girls across her district, is the online platform “Albanian Feminism”, which is still considered as the first school where young girls can find support, courage and knowledge for their engagement. The platform is like a family where you can find everything you missed, Reza claims.

In addition, she is happy, that her story has been written into a movie, and as such will be the only Albanian movie to be presented at the prestigious Cannes Film Festival.

As far as the righteousness for women in Kosovo, Rreze believes that women are barely existing in our society, that they are treat treated by themselves and others as secondary citizens, with several special roles that relate only to reproduction, without any role in the function of the society. Women do not enjoy any right and she considers that their rights are violated in every field and in every dimension.

When it comes to empowering women, she considers it very important to help young girls get educated in the right way. They must be helped out to get employed and become independent, as in that way they will no longer be treated as a property or someone else’s burden. At the same time, according to Rreze, we should pursue men towards the concept of equality; that gender equality and justice make it easier for them to live together and to fulfill society together. By giving the opportunity to the girls, we also contribute to how they will generally be understood, and how a new image will be created, as part of social engagement and co-operation with boys and girls. Interaction is, in her opinion, today the key to many social achievements. But we should not leave aside the commitment to absolute reforms, which means gender education in elementary and secondary schools. So, as early as elementary school we must learn that all people are equal, regardless if they are boys or girls.

The projects that have had a social impact are the following:

Rreze is a psychologist, however for the last year she has been engaged as an editor to the daily magazine “Observer” in Prishtina.