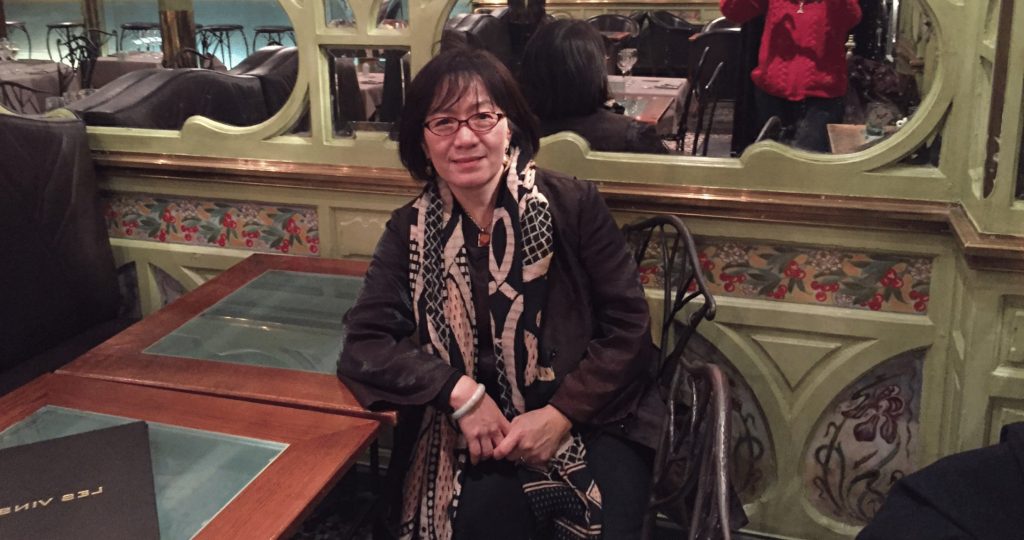 Rada Iveković (72) was born in Zagreb (Yugoslavia). No parents or children, the only member of the family is her husband Goran Fejić, born in Sarajevo.

When she was requested to say something about her character, she stated that she was not sure what she wanted to say in words, and also she did not want to respond as people are used to present themselves in the best positive way. She thinks that others can better estimate this. Perhaps, this is due to the fact that she constantly changed her disciplines, jobs and places of residence. Rada has essentially wanted only one thing – that the war and violence, especially violence and injustice against women, disappear.

She feels that she was fortunate enough to have had a happy childhood and that she personally avoided the war and lived in the time of peace in Yugoslavia (1945-1991). Naively and wrongly, at that time, she thought that peace lasts forever. She had many friends and people she admired, and she did not want to forget any of them. She is still in touch with many of them. One thing that one cannot forget is Yugoslavia, which, although imperfect and authoritarian, still and undoubtedly was better than the nowadays conditions in the territories of the former Yugoslavia. And certainly, her parents are never forgotten, and in her memories, they belong to the same gathering as that country.

Today as a warrior of inequalities, she states that her motivation to fight against the oppression of women early in her family as all started at a young age when she was watching the inequality in power between her father and mother, and later in society and at work place. Although her father was not violent, the patriarchate was at home and at the social and state level was obvious. She thought it was not fair to women. Her father died before she became a feminist (but he would probably only support her because she was his daughter, though she is not sure if he would support the feminist thing in general). Her mother supported her in every way, so she is still feeding herself on that source, long after her death. As for her generation of feminists, they were mocked, mostly by men, colleagues, journalists and media in general (with exceptions, but there were only few).

“We supported one-another, which is very important. It is a pleasure that, in the places where I lived, basic feminist attitudes and demands, especially those concerning violence against women, became officially recognized and acknowledged in general. This is not the case everywhere, but there is a slow progress in accepting feminist demands, which does not mean that women have become equal (in terms of equal rights or equality in places where they are, more or less recently)” – it is quoted by her.

Rada unfolds some important information in regard to her generation in Yugoslavia, whose first public engagement in the initiative to address women’s matters and their long-term persistence in larger cities since the late 1970s (1970 …) were of great importance and enabled them to learn more, to develop feminist knowledge, to continue expanding their activism as well as developing practical political knowledge. These are the early activities. What was special about everything: the proximity of personal political engagement as a feminist with the professional engagement of many of them. They repeated the feminist slogan “Personal is Political” or “Everything’s Political”, but everything was real!  One major issue arising from this first engagement was the apparent proximity of what they referred to as “women’s matters” and the national question mark (later, Julie Mostov edited a book called “From Gender to Nation”)

The happiest moment of her activism was to watch the feminist movement growing through the years, and to the women who become smarter and more open.

She thinks education is the most important thing, both in schools and in family and in society. Especially the education of boys and men. “Empowerment of women” helps, but it has also become a commonly recognized slogan coming from the gender mainstream. Certainly, women need to be empowered, but it is important to understand which society and under what policies will they empower them? She thinks people have to fight for politics, for a political project. Empowerment comes within the policy package that is taken in full. It is important for female demands to go beyond the political conditions and nationalities that exist in reality, and to overcome them in the direction of new and better political configurations that may be more friendly for both women and men.

“Empowering” women will not bring any harm against men, although the latter, in their narrow sense, can see this as a threat, but in reality, it is not. Men (though not all men) always had easier access to public authority/power. There are more obstacles for women. But, do women want the same approach to power/authority and state policies as men in the society they live? She doubts it!

Currently she has no role in society, she has no responsibility. She considers herself as a retired university professor. She works at home, meaning she reads and writes by her desk.

She does not think her reading and writing have some social influence. But she believes that our exchange of knowledge (with feminists, post-colonists, de-colonists, immigrants and refugees of all nationalities and generations) as well as publishing and sharing all that with others, has a social impact: it requires time and space. During the time (over the past 40 years or more) she saw the great advancement of women and feminists in the areas of Yugoslavia, Western Europe, but also in other places she went to, such as in India, Taiwan and others.

On the other hand, Rada states that we must not forget that such advances in feminist ideas often lead to new and unexpected conflicts from different crossings and actors. She worked on and published on the subject of Asian philosophies, feminist theory, translation theory and so on. “Southern” epistemology and hope to have at least some limited influence on some of the readers and students. She did not think she had any wider social influence herself. She thinks that these “things” need time over a person’s life.