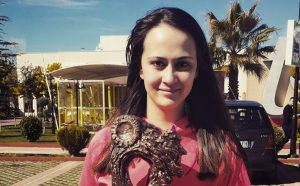 She describes herself as a persistent and she believes that she symbolizes goodness and struggle for equality.

When More talks about her childhood she says: I have many childhood memories that are mostly related to the movie. I remember when I was given a digital mini camera with which I started filming the first quadrant, and I chose as characters my childhood friends and for theme our childhood games, without ever crossing my mind that this game would lead me to the path of cinematography which is my form of expression and my profession.

More has started to fight for women’s rights because she thinks that our society is full of injustice, gender and racial discrimination, and it pushes her to become one of the critical voices in combating inequality and will therefore seek justice where it does not exist. Family and friends have supported her as always, especially when they have understood her mission and for this, she feels very fortunate.

The most remarkable activities are: The Rolling Film Festival dedicated to the Roma community. This is the project that she will always remember because she understood a lot about the life of this community in Kosovo and things she did not know before around this community and she is very concerned with the artistic creativity of this community, their tradition and culture, which is very rich and unknown to most of the population in Kosovo.

For Morea empowering women means creating equal opportunities in their education and this would result in a spirit of social equity.

As a film director, she mainly deals with women’s issues in Kosovan society to raise the public awareness and to unfold different, sad stories of Kosovan women who are discriminated against by a patriarchal backward mentality.

More’s most successful projects are:

“Home” a film, which elaborates discrimination of women in property inheritance. The film has appeared at prestigious world festivals.

The film “She”, which depicts violence against women and her silence.