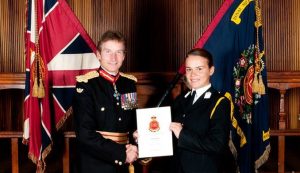 As far as Manushaqe’s character She is a very persistent person with clear and unchangeable principles. This fact often makes her very strict, but above all she likes to hear opinions of others about their beliefs. As far as work is concerned, she likes to follow the principles of the leader rather than acting as a boss or in her case as a commander. It is very important for her to be a good example for the people she leads, with the aim that the leadership characteristics do not stay solely stay on the theory they listened to at lessons, lectures or trainings. The importance attached to mediocrity has made her a consistent person at work, respected by others. Manushaqe symbolizes the commitment to build a stable and strong state with equal opportunities for everyone.

She used to be a vivid child and very often with some bold ideas. Like all children in the ’90s, she spent most of the time playing around the house. From childhood up to nowadays she has been living dynamically. She has always looked for opportunities to be involved in activities of different nature and in different social groups, which have in return helped her to become an open-minded person. She remembered the time of the war in memory, when she planned as a child in her head how to protect her from the Serbian army and the police. This memory creates a humorous thought when she remembers that her defense strategy at the time was based on the cartoon “Tom and Jerry” and the film “Home alone”. Based on this recollection, she says that it’s no wonder she ended up at Kosovo Security Force (KSF).

Manushaqe began to fight for women’s rights due to the fact that she thinks that a woman is very important pillar for every society, so everyone has to deal with her with great dignity. Both women and men are intelligent beings, so they also need to be treated like that. Lack of education or a healthy logic makes individuals or certain groups feel superior to people of the opposite sex. According to the holy law of nature, we, above all, are human beings, and instead of underestimating one another, we should choose to cooperate. Ignoring is the trait that she fought against, regardless of cause, and for her part of ignoring is patriarchate. In most cases, a positive approach and education are the strongest weapons used in the struggle for women’s rights, so the reactions of family and society are acceptable. There are also cases when society condemned her for favoring women, but she always solved the issues by a fruitful debate.

As a woman in the army, she often receives calls from various NGOs advocating for women’s rights, but the activity of special importance is her participation in the ranks of the KSF. The specialty of this profession is that this is a world dominated by men and in which the presence of women is often not desirable. During her time in her quest for KSF, she tries to break down the stereotypes that are set for women, especially by refusing to “favor”, which is usually done in the sense of understanding the feminine genus that, allegedly, she cannot withstand the demands of the chosen profession. Likewise, she constantly strives to be treated “differently than others” in a positive sense, a “compliment” that is mostly used by men to refuse to recognize the fact that women can stand this profession too.

Speaking of equal rights for the Kosovo women, Manushaqe believes that women in Kosovo are part of a society that has given the most to themselves that this nation survives all the difficult stages in history, but in addition to the fame they deserve, many of them, unfortunately, do not enjoy the basic rights.

Empowering women means having a strong state with an emancipated society. Today, a woman plays a very important role in the basic structure of the family society. A powerful, well-educated, high-ranking woman in both society and decision-making institutions in the country would bring a new spirit for building a country that would have prosperity in every family. There are many basic institutions in Kosovo that are responsible for creating a situation where the spirit of social equality is lacking. We spend a large part of our lives in educational institutions so that investing in positive reforms in this sector would have great potential for strengthening the spirit of gender equality.

as far as work is concerned. she is a police officer in the Kosovo Security Forces with a rank of Lieutenant. She’s been in uniform for 10 years. Her position is the Deputy Commander of the Brigade for a quick reaction. From this position she manages the careers of her subordinates and takes care of the planning and realization of the training necessary for the development of the KSF. Because of the work that works and the challenging journey that has gone to reach this position, he thinks he has great responsibility and can be a model of society. Many young people, especially girls, see her as an inspiration to follow the unusual way of life of a woman. It is considered obligatory to maintain high standards and to remain faithful to her principles for all those who see it as such. This fact is a great responsibility that requires ultimate dedication and gives it an important role in the development of society.

She is trying to constantly motivate women in the KSF to stand up to the maximum, and to believe in their abilities, either through an elaborate example at special meetings. Likewise, for those members it uniforms, she takes care of their welfare and sees them to receive dignified treatment. Of course, there is more work to be done.

Awareness of women to refuse unnecessary benefits due to gender is of great importance to her, therefore she strongly advocates the elimination of this element.

She was part of the various panel discussions and round tables where she always represented the difficulties that women in the security institution still encounter, aiming to be as realistic as possible. She tries to bring their concerns to the forefront and oppose any unrealistic situation aimed at providing information only to regulate the image, which is not in line with what is happening on the ground.

The work that she does, will not allow her to expand her activities beyond the institution she represents, but nevertheless with special permissions, she tries to provide as much as possible from her experience.