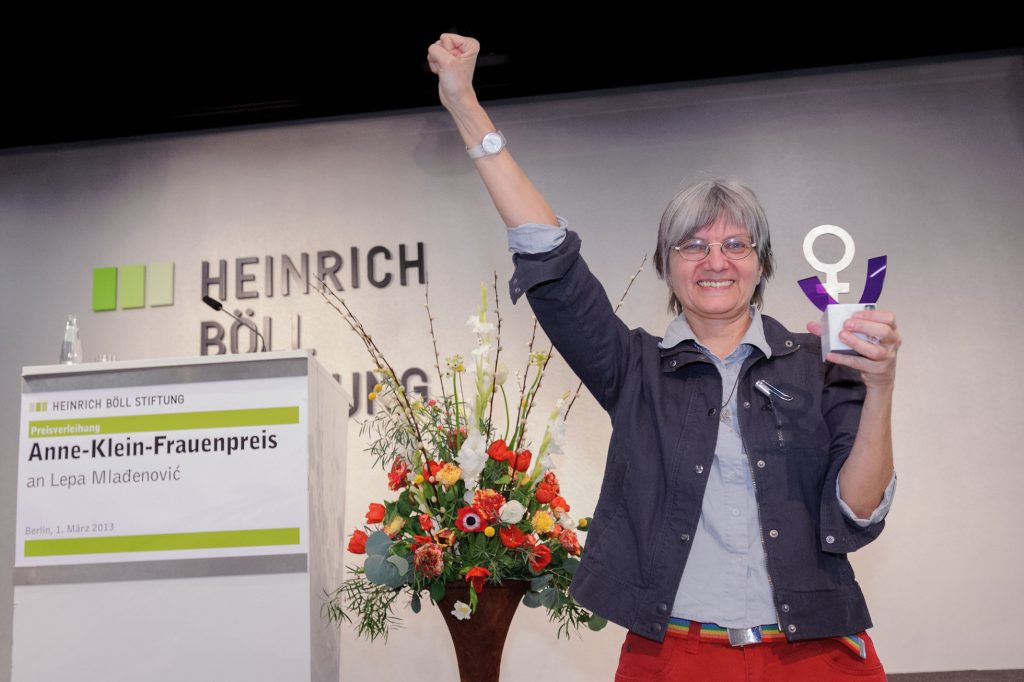 Her name in Serbian language means Beauty in English and Bukurije in Albianian, yet she prefers to be called Bukurije. To her, this name is special because it is the nickname given by her Albanian friends. The one who knows the Serbian language, understands that her name is Lepa. So, she is Lepa (Bukurije) Mlađenović, an activist, feminist, winner of the Anne Klein Women’s Award and lesbian from Belgrade, Serbia.  Who is Lepa Mlađenović?

A well-known name to everyone in the feminist movement, a symbol of activism in the former Yugoslavia where she continues to inspire women and men with her magical energy. Her dedication undoubtedly illuminates a light in this world for all women and lesbians, so that we (read: women) can walk freely and happily.

She describes a typical Communist-era morning in the former Yugoslavia; a thin, cut loaf of bread, and a little home-made marmalade. Her socialist-Marxists parents, reminded her of no class repression or gender roles. But was that really the case? For this, Bukurije used her passion and wisdom to fight these ideals.

The connection of Lepa with her mother was special. She describes her as a very beautiful woman who supported her during feminist actions. Lepa paid back this support by bringing her books. She was the only person who stood by, opposing her family when Lepa in 1987 publicly stated that she was a lesbian. Her mother had no idea that there were many other lesbians in the world, but nevertheless she supported her. “Whatever you do is right,” she remembers her words, perceiving that this is the light of the faith we need (women). And if we did not have such mothers, we should invent this light, and show it to ourselves and to our friends. Every day.

Year 1991. Yugoslavia was being destroyed by warriors; many dead, destroyed houses, rapes, terror. These are the saddest moments for her. During the first war in Croatia, then in Bosnia and Kosovo, Lepa was staying as she says, at the headquarters of the all-encompassing criminal plot, namely in Belgrade. It was very exciting for her to meet sisters from other countries and to listen to them, endlessly as Lepa says until the moon smiles at them, because as she stays: “Women’s alliances are revolutionary potentials”. This state of affairs pushed Women in Black, where Lepa was a co-founder and activists, to protest in Belgrade’s Square, while during the war in Kosovo they protested with the banner in their hands that read “ALBANIAN WOMEN ARE OUR SISTERS”. They decided to dress all in black, to simulate the misery of war victims, not saying a word during the protests. Threatened by some neo-fascists who wanted to destroy the message, she realized that the feminist truth should always be spoken in the face of criminal regimes. Yet, since the beginning, Lepa Mlađenović took care of women who were survivors of war by sending the necessary supplies to the other side of the border, visited refugee centers and constantly communicated with the “enemy” women and made the society aware of the position specific women in the war and violence they suffer.

This woman who consistently developed resistance to violence was the founder of several organizations such as: SOS Lines for Women who have suffered violence by Men (1990); Center for Autonomous Women against Sexual Violence (1993); Labris – The Lesbian Association for Human Rights (1995). Between 1983 and 1993, she co-founded the Feminist Group Women and Society where she organized many workshops on violence against women and their health. Lepa is a person who generously raised her voice and trust to many women throughout Serbia and around the world by changing their inner world little by little.  Lepa Mlađenović is one of those women who believe that the bond of the sisters has no boundaries. She has participated in almost all feminist events organized in the 1980s throughout Yugoslavia, actively forming the meanings of “Yugoslav feminism”.

“When women begin to love their bodies, the patriarchy is already damaged,” is one of her favorite sayings.

Lepa Mlađenović was born and raised in Belgrade, the city she never left.