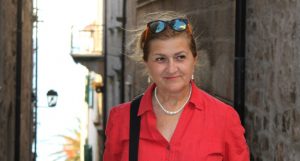 Jadranka Milicevic is her own heroine. Before the war she had a happy childhood and was surrounded with great love and was able to fulfill some of her childhood dreams. In the first grade, because of success, she won a book called “Partisan Stories”. Jadranka was also a table tennis champion for the city of Sarajevo and at the age of 21 she made the first steps towards her independence. In the 1970s she passed the driving test, which for that time was a privilege for man and let alone for a young women.

The years 1992-1996 were very difficult for her. One year before the start of the war in Bosnia and Herzegovina, she began to oppose others who spoke in her name, demanding more rights for women as a peaceful activist, saying NO to war and violence. She was forced to leave her destroyed house and find a safe shelter for her family. So, in 1992, she moved to Belgrade as a refugee, living in a small apartment in Zemun with her two little sons and her mother, while her husband remained in Sarajevo.

Staying in the Serbian capital conveyed her with many activities. She joined the “Women in Black” from 1993 to 1996, protesting the crimes committed by Serbia in the region, especially in BiH. During this time, this group was a window to the world offering many opportunities and moments of happiness in a period of crisis and violence. Jadranka remembers how they organized concerts in the camps, theatrical performances, language lessons and photography. From this period, Jadranka mentioned also a book called “I Remember”, which was a compilation of personal experiences from refugee women.

She maintained that every Wednesday they went to Belgrade Square, protesting against the criminal regime that was responsible for the wars.

Jadranka, who found support and peace with her friends at Women in Black, gave her a supporting shoulder to get information and provide help with the SOS phone line for Bosnian victims of sexual violence during the war in Bosnia.

Following the end of the war, she returned to her birth place (Sarajevo), devoting her to the cause of women’s rights and building peace over any nationalist preference. She was one of the founders of two organizations “CURE Foundation” and “Women for Women” and now she works as a project manager at Care International Balkans by leading the program for inclusion of Roma women in the Western Balkans, implemented in Bosnia and Herzegovina, Serbia and Montenegro.

Along with the CURE Foundation, they have carried out many successful initiatives such as: 1. Empowering and involving younger generations in activism and feminism; 2. Involvement and mobilization of women in small communities by advocating for changing conservative and patriarchal policies and adopting conventions: The Convention on the Elimination of All Forms of Discrimination against Women (CEDAW) and the Convention on the Prevention and Fighting of Violence Women and Domestic Violence (CAHVIO). 3. Advocacy through the educational system to prevent and counter violence and create safe space for women from the LGBTI  community through workshops to resist homophobia and transphobia.

Jadranka won the award “100 heroines of the world”, an award that recognizes the courage and vitality of women in the world. Whereas, in 1998 she won the Peace Prize for her contribution to peace building and promotion of human rights (New York, USA). She was one of the first women to encourage the spread of feminism, in an unknown society, showing that feminism means equality, fairness and equal opportunities between women and men. She was also one of the initiators for the Law on Gender Equality, where BiH was the first state in the region to promulgate it, yet with many problems encountering in its implementation.

Jadranka Milicevic was born in Sarajevo in 1957. Today is the mother of two sons, fellow, sister and widow.