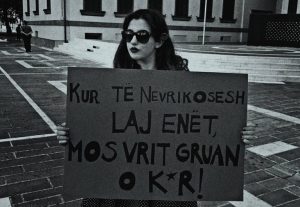 She says that the best choice is to persevere. Being a woman in a violent male society means prematurely becoming conscious of social and gender differences. This means that while yet very young and unable to comprehend the complexity of unequal relationships of power, you feel and realize that the world is different from you, because nature has not equipped you with the fleshy organ to which the whole society bows! This in return translates into suppression, discrimination and hijacking of individuality, freedom and basic rights of man and girls or woman.

At the transition from childhood to puberty, she had the impression that the expectations of her family and the society for her were different from those about her brother. Since his future was perceived as an ocean of endless possibilities and infinite freedom, things were different for her, they were lower, without any real vividness, and that was the first sign of her growing up. The tradition of inherited violence from generation to generation has taught girls that with the appearance of menstruation, girls should not be allowed to play with friends in the courtyard of the buildings, instead, they should begin to train for domestic and household things in order to marry in the future and to prove to her spouse that she is a perfect slave, she concludes. The primary conflict came when her interest, desires and thoughts did not match the interests, wishes and thoughts of others about her. That was the moment of realization for her, if she hadn’t risen her voice, she would start to lose herself, and that was constant projection of other people. It was just as shocking as it was sad, Gresa adds. Trying to save something has turned everything into a journey to better acquaint herself with the society. The refusal to accept the iron boots of the system over her head, a later attempt through years of freedom and equality, suggests that this protest begins with her in a closed and too personal context, and in fact is greater than her, and that it exceeds her. He sees this dismissal as a constant effort of human society to reach the highest level she is capable of.

She began to fight for women’s rights because she feels that personal is political. Politics starts at home and then returns to the street and at the assembly, she says. She sees herself as the woman and citizen of the Republic of Albania. Anything that alienates her as a woman, alienates her as a human being and a citizen with equal opportunities and rights in the society she belongs to. This is seen, above all, as a social problem rather than individual; individuals have public functions here. The question of women is not just a question for women but for a whole society. There can be no social development in any area if women and men are not treated equally and if they are not offered equal opportunities and rights, Gresa adds.

It is important to understand that patriarchy does not affect women only, but it does affect men too. It harms both sides, she emphasizes. Only the face of patriarchy changes, not composition. If this anti-value system leaves a woman at home, without money, without freedom, closed almost as a dead, portable trophy given from father to husband; it is a burden to a husband with more responsibility and concern of another nature, Gresa concludes.

The patriarchy turns the woman into the victim and her husband in the criminals, who is, in turn, another type of victim, Gresa adds. According to her attitude, the change begins with communication, sharing of common experiences and sensations in which we are locked and this communication cannot start anywhere else, except at home, where the first figures of authority are contested. Call for dialogue and identification of the real enemy; to clarify that our problem is not a husband but a system that both attack us, that is it connecting bridges between the persons in one family and then the tree society of a common solution.

The following activities and projects will be remembered forever:

At midnight, on the night of February 14, this year, together with several young women, she decided to cover the walls of the city of Tirana with paroles against the violence. Using the symbol of Saint Valentine, a day devoted to love, after an alarming number of gender and domestic based murders, we used three expressions to challenge this reality:

The special part of this evening is perhaps seen in the note of the last parole (the crime of passion) on the wall of the First Instance Court in Tirana. The largest part of the women who had been murdered were given a warrant and were constantly reporting a crime, but the law failed to defend them, she says. Very often, a corresponding percentage of women who had a restraining order kept living with a partner, a potential killer. The idea was to awaken their city on a Day of In Love with a message and to remind people that violence is not equivalent to love.

The situation of women in Kosovo is not different from the situation of women in Albania, notes Gresa. They also suffer from the violence that takes their lives away, and if they do not take their lives, it destroys them, it is her conclusion. Above all, the state of Kosovo has not yet given the appropriate deserved attention to women raped during the war. This issue has not yet come to the forefront of a public rigorous discussion and tackling this issue at all levels of policy making. Yet, the valuable work of numerous women and men in for equality, during these ten years since the birth of the state, she concludes, extends the path to the development of a feminist discourse. It is about activists who work hard for a better reality for everyone. Social changes are moving slowly and the fruits of labor are collected over time. While there is resistance, there is hope, says Gresa.

She thinks the key to empower women is the education and educational system. She concludes that, in order to have a radical change in the way of thinking and acting as a society, we need reform from the ground where structure and thinking are established. Schools can not only play the role of an informant, otherwise it would be difficult to get the name and status they are vested with. They need to educate people first, bringing forth smart and righteous citizens, good and honest citizens.

Respect, tolerance, and love, if they do not learn that at home, cannot be taught at school. In this way, Gresa believes, for example, to have more beautiful women who are free, who will not be afraid to support the things they love, to be an active part of society; women aware of their social status and with understanding of their role in society, and who realize that that role doesn’t end with marriage. This way, she adds, we would have more boys and men who would not be ashamed of tears, because ultimately, these are signs of humanity, not weakness or endangering the fantasy of masculinity, rather than proving injustice and silence about these things. We would have one word for more men and women who know and respect each other’s rights and walk past each other for the same future that belongs to each of us.

Her current roles in society are: being a student, activist and publisher. She is currently studying for Political Sciences at the Faculty of Social Sciences at the University of Tirana. She is also an activist of the Movement for University and Political Organization in Albania. For six years, she has contributed to various papers, mostly political, social and cultural, in the “Landscape of words” magazine and recently in Prishtina’s “Kosovo2.0” magazine. She previously wrote articles in some of the important city newspapers that he decided to boycott for the sexist spirit and the constant objectification of women. Feminism is an integral and indivisible part of any of its activities or deeds.

The two projects/activities in which Gresa participated and which had a social impact were: