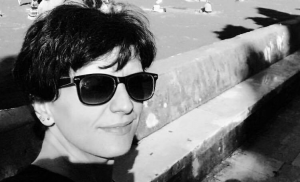 The word “Dua” is a verb and in the Albanian language means to love. Love is a strong and deep feeling that enables us to get so close to someone or something so that one will never want to detach from that person or thing. And those who knew Dua and her actions know that she has fulfilled the prophecy of her name. Dua was filled with life, full of love, sincerity, inspiration and she became the role model for the new generations. Dua took her two-year-old sister to play outside the house where she fell, which had frightened her tremendously and this moment for Dua represents one of those events that impressed her, confesses her little sister Nexhiba. Naxhiba further comments by saying that ever since young Dua had manifested the sense of responsibility. Dua’s life was full of contributions to her movement for more rights to Kosovo’s women.

In 2005-2006 she worked as a researcher at the Kosovar Center for Gender Studies, where she contributed significantly to the research “>History, is her story” . This book brings stories of powerful, inspirational women, activists from Prizren, Krusha e Madhe, Vushtrri and Prishtina. In 2011-2012, she joined the Kosovo Women’s Network (KWN) as a member of staff, as a researcher and writer of “At what price? Budget Allocations for the Implementation of the Legal Framework against Domestic Violence in Kosovo.” In the memory of Dua by Nicole Fransworth and the Kosovo Women’s Network it is written: In the years that followed, whenever KWN needed colleagues or researchers (because someone had left), Dua was there to help us without laziness, traveling to Mamusha, to Prizren and in other municipalities, though we have announcing her at the last moment. An excellent communicator, freely talked to different men and women in Turkish, Bosnian, Albanian and Serbian, including difficult topics such as domestic violence. She was an unmatched volunteer at KWN, giving us thousands of hours to contribute to the advancement of women’s rights. She attended nearly in every KWN biennial meeting, actively following the network initiatives.

Dua Dauti – Kadriu, the mother of Diella and Alp had practiced the psychologist profession as one of the most important professions, especially for our society (read: Kosovars) who still suffer from trauma of war, stress, depression … In the show “SOT” on the Kosovo national television “Kohavision” in the section “Time for children”, Dua advocated for the ban on “fast foods” and sugar, as well as explaining the problems, the bullying , the behaviors and characteristics of children. In addition to lectures on the television program, Dua visited schools without hesitating to discuss the right education techniques for children’s health with parents and teachers.  Dua was a member of the Independent Media Commission in 2017, a member of the KWN Board of Directors, where she served in 2016 and 2017, including briefly as Chairman of the KWN Board Dua Dauti – Kadriu left this world horribly, early and unfairly. She left tragically from this world, drowning in the Ulcinj Sea on July 6, 2017, at the age of 36. “She wanted values. She loved values. As she insisted on them, as if she was holding me by the hand, to say let’s love the world, let’s love life and what we are going through and let’s move forward. Now, look, come faster, since I won’t stay long here. I’ll go fast, so let’s plunge into the beauties of life,” her husband Haliti remembers her with love.

& DUA as prayer, DUA as love, DUA as a sister, DUA as a mother, DUA as a true friend. The memories, the eternal ones are many and very special, the values that Dua have taught me have no end. “Read” was the first command of God (Allah) for Muslims and Dua always read, so she was educated in that way (all the merits belong to my mother, she used to say), her mother was her role model for everything, and this could be seen in her daily conversations with her children Diella and Alpi, remembers her close friend, Mjellma.

“To my parents who gave me a full-grown childhood with love.

To my children, who are my love.

To my husband, who motivates me with love.

To my sisters with whom I shared kindness.

To my grandparents whom I have adored.

To my benevolent tribe.

To Mjellma, my eternal friend”

– this is Dua’s writing, dedicated to her beloved ones.