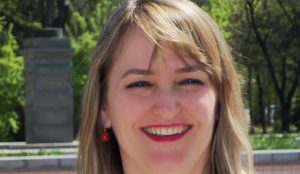 Delina Fico is an active woman of civil society in Albania since the 90s. She is a leader, manager, a woman with expertise in advocacy, gender equality, the development of individual and institutional capacities. Over 50 years she has worked with lots of local, regional, international organizations and intergovernmental agencies in Europe and the United States of America as: Chemonics International, World Learning for International Development, East West Management Institute, UNIFEM, Open Society Institution, and in some other places.

Delina, who was born in Beijing, China, about 8,000 kilometers from Albania, had spent a life surrounded with love, with people she loved, appreciated and give her lots of love. Delina says she is a lucky human because she has always had the opportunity to get good education and do the kind of jobs she always liked.

23 years ago, Delina was the director of the Women’s Center in Tirana. Throughout these years, Delina has not changed, she is still dedicated to the causes she has faith in. As her causes have increased, her trust has not ceased.

< “I am a committed person, meaning that when I see a social problem, I want to do something to solve it. I also fanatically believe in equal rights for all, especially for groups that are often discriminated with various justifications. I see life, the world and people with beautiful eye, I believe in the good in them,” describes Delina her character.

Her commitment to support women’s rights was originally initiated from a very strong sense of respect for the equal rights of people, a sociable subject that was very small. Although, her parents, siblings and friends have always supported her commitment to equal justice and equality, they have sometimes made fun of her, as Delina speaks of her fanaticism to point out any manifestations of gender inequality, such as for example she always reacts when watching television debates where a man journalist moderates a discussion among five other men.

In the mid-1990s, with nearly all women’s organizations in Albania, she began advocating for women’s reproductive rights. MPs of the Albanian Parliament approved a progressive law regarding these rights, meanwhile they voted AGAINST the right of women to make decisions about their pregnancy. In those years (1990s), the women’s association “Refleksione” and the Women’s Center (now the Gender Alliance for Development), with whom Delina worked at that time, had built the first counseling center for women and girls who are victims of violence in Tirana.

“A lot of things have been moving forward in regard to women rights in Albania in these last 25 years, following the political changes of the 1990-1992 years. But women and girls still face great challenges: (i) Violence against women, which is still at a very disturbing level; (ii) the level of social services, especially for children, the elderly, people with disabilities, which is still very low and limited, causing the care of these groups to fall on the shoulders of women; and (iii) the poverty and lack of access to safe employment for a significant proportion of women and girls are three of these major challenges,” – states v Delina, comparing activation time from the 1990s to the present.

& Delina has served on several boards of renowned organizations in Albania and Kosovo, as in the organization “Refleksione” and Kosovo Women’s Network. She studied for political science as well as for non-profit organizations management at the New School for Social Research in New York. Today, she is engaged in two main fields: she works with programs that support the development of civil society in several countries of the world and, as a volunteer, she is engaged in supporting the rights of women and LGBTI people in Albania and beyond.