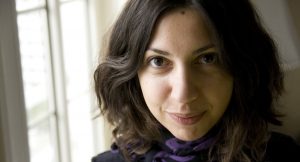 The age of 15 years, unlike for her peers, it was different for Blerta Zeqiri. She had formed a musical band that played rap music. She resisted and chose to break the taboos when she decided to study the film, a subject considered by many as “the profession for men.” They told her that she was getting a place meant for a boy, who would eventually become a film director and create a family, while for her, after finishing the studies, she would simply get married and end her pursuit of career as a film director.

Blerta Zeqiri, today a successful film director, has started her career as a vocalist in a music band, therefore a great part in her memories from childhood and adolescence lay with her music activities. The band named BAM was named after the three girls of the group “Blerta, Ardita and Mimoza” who sang in Suhareka – a small town known for the cultivation of vineyards in the southern region of Kosovo. This was also the first female rap band in Kosovo.

Her music activity brought her many exciting and definitive moments in her life, confirming her success combined with her work. Though a small group, they had taken part in the very famous festival at that time called “Show Fest”, where they achieved the first place and once the second place. Blerta, who wrote most of the texts for the group, cultivated the passion for music up to the age of 19 when the war started in Kosovo. From the BAM band, today only Mimoza continues to perform music. She is now known as Mimoza H, who launched her solo album last year in Canada and has had many great reviews from Canadian media.

& Since Blerta as a teenager had developed her career in RAP music, her parents were not surprised to find her later on in a different type of art. Initially, she was enrolled in the department of Dramaturgy at the University of Pristina, but her heart was in the film direction. When she told the professor of the direction that she wanted to study for film direction, he replied that “this faculty is for meant men and the film is not a profession for women.”

Even if you are the best of all, you are a woman and tomorrow you will get married, create a family, and leave the direction. In the end of the way you are only taking the place of a boy who will actually do more than you, because he will not leave the director’s work even after he has created family”- recalls Blerta the words of the professor of direction thrown on her at the University.  Blerta, who studied film in France, has won several awards for her tireless and professional work. In 2012 she was best-known for her film “Return” at the “European Independent Film Festival”, which takes place in Paris, France. For this film she has also won the Sundance Award, in Sarajevo. This film also opened the door to Kosovo in international image. When the film won the Sundance festival, the central news in Kosovo started to transmit news about culture, too, something that rarely happens. And the short feature film, which brought her some rewards brought tears to her eyes, but also a lot of joy, too.  During the filming of the movie, she was thrilled by the acting of Adriana Matoshi and Lulzim Bucolli, two famous actors from Kosovo. “During the editing, I’ve been crying and laughing many times with the filmmaker and my spouse Keka. I was crying when the movie was released at Sundance’s big cinema, because I was dreaming a dream, I never dared to dream. I cried the next day of victory in Sundance … It is this project that has brought me tears. I have been crying because of the topic being dealt with (civilian war victims) and I have been crying for joy for the successes that the film achieved.”

The movie “Return” presents the life of a woman who lives with her son and after four years the husband come home for whose whereabouts, she knew nothing, and he was in a Serbian prison. The film begins after the family reunites … The film deals with the survivors of the war. Whereas, the feature film “Marriage” for her is extremely special because it deals with a love triangle of the three victims in our patriarchal society: the love of two men and the women of the latter, who is the effect of the situation created precisely by the inhuman rules of patriarchal society. The film premiered at an A category festival on November 28, 2017.

Blerta also works as a tutor with high school students in the project “Documentary Film School” organized by Dokufest. This project addresses human rights and values, which fill Blerta’s life with energy and positivity. These days Blerta is working on the concept of a television series and at the same time is promoting the feature film ‘Marriage’, which these days will have the world premiere at the festival Tallinn Black Nights.

& Finally, Blerta suggests that we as a society should urgently change the curriculum and the textbooks that still have many problems, especially with gender roles that are still staggered between the girl and the boy, man and woman.

Blerta Zeqiri today lives in the Dodona neighborhood of Pristina in Kosovo, with her husband Keka Kreshnik Berisha, their children Zogu and Nata as well as their puppy Mambo.