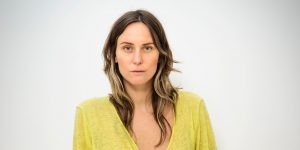 Alketa Xhafa Mripa is a talented contemporary artist, a mother of four, a yoga trainer and an entrepreneurial woman who leads along with her husband, “Tea House”, in London. Alketa Xhafa Mripa began her journey in London, initially as a student, then as a refugee from the Kosovo war, which today through art gives a ray of light and hope to all those (refugees) who are now far from their homeland, in the foreign soil. For her, art is the language of choice, her voice traveling with her when she does not need to say a word. Art, for her, is the desire to visualize things, when words have no power, are her motives of work, the intentions to reveal the truth, the lost, the forgotten… the ungodly and the unheard.

Alketa grew up in the 1990s, in Pristina, Kosovo under Milosevic’s regime. The first thing she remembers is childhood and youth are a mixture of emotions: Happiness, War and Injustice. The emotion of happiness memorizes the moments under the roof of her home, within the family circle, while the pains of her nation remember the war and the injustice. Alketa recalls those years when Kosovo Albanians were constantly denied basic rights; a time when Albanians experienced discrimination in employment, non-housing, non-education and unjust trial.

“I was Albanian, so they did not have empathy on me. The education in my language was denied,”

In addition, there is one thing that will stay permanently with her – and – it is blood feud. During the 1990s, together with parents, she attended mass events for reconciliation of vengeance. For her, it was the first time she faced the sense of solidarity when a whole society, with people from all walks of life, poor and rich women, from urban and rural areas, pardoned the old disagreements and decided to walk forward. For her, it was a beautiful experience I will never forget.

“I think this experience was deeply rooted in the memory, when I introduced the installation of art ‘I Think of You’, for the survivors of sexual violence in Kosovo. That’s because I wanted the survivors to experience that solidarity”…

The installation “Thinking of You”/”Mendoj per ty”, which gathered about 5000 dresses and skirts at the Pristina Stadium for survivors of the last war, was the happiest moment in her life. This installation recalled their pain and honored them. Many women and men had gathered together to give a message that they had not done anything wrong and to tell them “we think about you” to break the silence and the stigma, turning to the best testimony of solidarity. This installation was selected by UNWOMEN as one of the events that characterized the year 2015 in terms of gender equality. After spending her childhood in Kosovo, completing elementary and high school, she moved to London in 1997 to start her studies at “Central Saint Martins”, continuing further on to “Tate Modern” for Art History. Today Alketa is an activist, artist and feminist. Through the art – as the most powerful means of transmitting the message – raises discrimination and disparity between men and women. Through her artistic creativity she tries to raise consciousness, to change perceptions, start and take action on the particular problems. Every artistic instillation must be something that provokes her; an injustice being done to a person or group and she feels that she must act upon it. Recently she was invited as an inspirational artist in this year’s edition of PLATFORMA Festival. Alketa is also strongly associated with the cause of refugees and the terrible treatment the world is doing to them and has created the installation “Refugees Welcome”.

& Asked what the empowerment of women and men means, Alketa says that women’s empowerment should begin within the family and that it is not something to look for; begins how your father treats your mother, as your brother treats the neighbor’s daughter. For her it is pointless how one should be treated differently just because of his gender, race, nationality or belief … at the end of the day, we are all people of this world.

She admires that today there are many individuals and groups fighting for the empowerment of women, citing many women like Myrvete Dreshaj, Zahrije Podrimçaku, Sevdije Ahmeti, Safete Rugova, Igballe Rogova, Vjosa Dobruna, Luljeta Pula, Kaqusha Jashari and which, with their activism and passion, paved the way for new generations to continue the cause of equality.