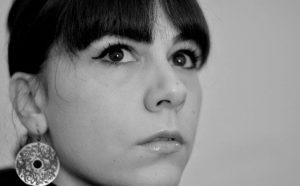 Adelina Berisha is the last child of Berisha family from Prishtina, Kosovo. Her childhood, as well as most of the children from the 1980s generation, could be counted as anything but a childhood!  She belongs to the generation whose first contact with the public was encountered with injustice and discrimination! She belongs to that generation that was banned from entering school doors on the first day of school on September 1st, 1991. It can’t be contrary when you are from the first day of school violated from the right to education and faced with oppression of the essential rights of political engagement at that time.

“We were children of course, but it took us a walk down the corridors of the school, to reach the section separated only for the Serbian students at that time, which represented to us a form of revolt, a seizing  of the school space that was meant to belong to everyone, but, which unfortunately did not”, – describes in detail Adelina the period of her elementary school.

Adelina, today 32 years old, back then expressed her creativity by drawing red and black flags, listening to poetry, storytelling, and writing essays with a full dose of nationalism and patriotism. Though very young, without even realizing what the protest was, she along with many others of her age always joined the protesters crowds. However, despite this, this generation of protests was always engaged in voluntary work such as school maintenance and cleaning.

After the Kosovo War 1998/1999, Adelina began to educate herself in regard to becoming an active citizen. In 2001, when she was 16, she was selected by the State Department, under SOROS support, to attend the school for debate and leadership for a period of one month. And since then, she began to be engaged in activism, initially as a founder and a member of the debating group of medical high school where she was a student.

Today, Adelina is one of the most verbal activists for women’s rights. She was always against the difference and injustice. As a child, she was fortunate to grew up in family along with her siblings, the three sisters and one brother, without differences or preferences. She had not thought that there were specific roles for men or women because she had not seen it in her mother and father. Yet, the story was different at the school environment. Girls, for example, were not allowed to react or rebel because they “were supposed to behave”, girls were considered harlots whenever they started a love affair and ended it to begin a new relationship, while boys were “IN” and were considered as charming for managing to have more than one love affair. Moreover, a certain haircut made them subject of rebuke! For example, if we girls decided to keep their hair short, some teachers rebuked them, considering such a haircut as something intolerable!

At the age of 22, Adelina began working as a research assistant at the Women’s Network in Kosovo. Her first project aimed at linking gender-based violence and reproductive health, which remains to her as the most special project. There she understood how many women and girls are pressed and how for the most intimate things, such as health and reproductive rights, women and girls need the approval from their family. Or even worse, they should approach health institutions in order to seek reproductive health services in a quiet manner as someone who is doing a bad deed. “It is worthy to be noted that this was also the first research of this kind ever conducted in Kosovo, and I think that the introducing such a debate into the public was also a special feature of this project”.

Adelina, for the past seven years, is engaged in the Kosovo Women’s Network, a network of 106 organizations advocating for women’s rights. Adelina together with KWN have released a research on domestic violence and sexual harassment (the first research in Kosovo of this kind), which has had a significant impact on Kosovo society. The survey “Security Begins at Home” conducted in 2008 had a special role in drafting the law on protection against domestic violence, as the outcome of this research was also the basis for the initiative in the process of creating this law. Also, in 2015 the research “Enough with excuses” was conducted and its recommendations were taken seriously during the drafting of the National Strategy against Domestic Violence for 2016-2020.

“The network for me is more than a day-to-day engagement, it’s who I am today, what I represent, what I’m fighting for and what I’ve talked so far. The network provides me with an environment where I feel confident, comfortable and supported to give my contribution to society,” states Adelina.

Adelina, who believes in the triumph of good and that through the solidarity and faith we can reach the good, says that we need great courage to fight the patriarchal mentality that prevails today in our society, but that cannot come, while we have almost every year minimum of two murders of women and girls, and our society is not yet appalled by this phenomenon. She says we should have the courage to change gender roles to equally share engagement and decision-making of women and men in all spheres of society. She believes that one must understand that joy, cry, grief, rebellion, mildness, goodness are emotions and reactions that do not know gender. Also, we must understand that biological differences should not determine our commitment to society.

“I will not accept the things I cannot change. I am changing things that I cannot accept”- this is the saying of Angela Davis, characterizing Adelina’s rebellious and activist spirit.